Volcan. The distinctiveness of each grape

■ Volcán Vijariego
dry white
For some, a cult wine. It has stood out since its first year of production as an unusual wine with personality, an ideal companion to high-end gastronomy…
(Keep reading)

■ Daniela
Sweet
It has a very delicate sweetness, but nevertheless a strong flavor and aroma. Its philosophy is based on a sweetness that is not too sugary or concentrated…
(Keep reading)
Though he started out studying veterinary medicine, Elías Santos Guerrero soon discovered that his vocation was oenology: “when my brother invited me to a harvest in Tenerife I was captivated.” So he decided to change his field of study and move to Valencia. It was love at first sight, and he “does not regret it.” He started his own project in 1998 in a tiny garage, producing only very small amounts at the beginning, but producing 20,000 kilograms in 2014, quite a lot considering the dimensions of his small winery.

Elías Santos, vintner:
“We produce seven different wines, It’s crazy, because someone with 20,000 kilograms of grapes usually makes one, or at most two wines”

What makes Volcán special is the use of microvinification. He is dedicated to producing “small amounts of many wines,” as he puts it – seven different ones at present. “It’s crazy, because someone with 20,000 kilograms of grapes usually makes one, or at most two wines.” As if that was not enough, this 2014 he has already decided to increase the production with three more wines: a white from Verdello and Forastera Blanca grapes passed through American oak barrels, one from Tintilla aged in the barrel, and even one sparkling made from Listán Negro. Precisely because what he likes is to draw the distinctiveness from every variety that his cultivation achieves in different areas. For example, he produces only a thousand bottles a year of his white from Vijariego, cultivated in the heights. “Why don’t I make more? Because I would have to look for the same grape in other estates of lower altitude, and the wine just wouldn’t be the same.” His diverse production includes various wines made from the Listán Negro grape, such as a red aged five months in American oak barrels from a grape that comes from a ecological farm, a red that is macerated with carbonic anhydride, a traditional red, and a sweet red. “I think it is a variety with which you have to argue a bit in order to get interesting wines with distinctive nuances: the one from a coastal area like Monte Lentiscal produce a more robust wine, and the one from higher areas, lighter and more aromatic wines. Putting them together in the proper way is what I find interesting.”

This winery not only produces very original and personal wines, but also has a packed event calendar

This winery not only produces very original and personal wines, but also has a packed event calendar to which friends and wine lovers are invited in social networks and participate all year long. Small groups of tourists and cruise passengers are also a frequent sight. By attending the events (which cost as little as 2 Euros for a tapa and a glass of wine, depending on the activity) you can get to know the wines of the year, participate in the harvest, get together for charity dinners, and listen to live music, among many other things.
Previous post

Viña Frontera. The most exclusive grapes for the most traditional and original wines 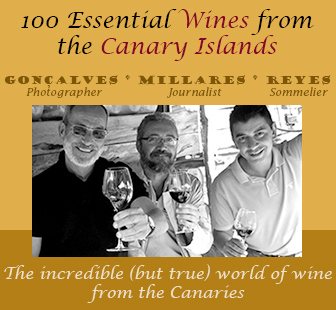 Tour through the wineries and landscapes that make up the book “100 essential wines from the Canary Islands”, in images captured during the four months in which the authors traveled from east to west through six islands of the Canary archipelago.

Volcan. The distinctiveness of each grape

Matías i Torres. The curiosities and charms behind personal and elegant wine 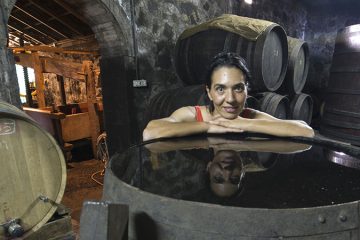